Several years ago, I participated in an ideation session for a new product, lead by an innovation consultancy called Gravity Tank. At this session, we were each handed a stack of 8½- by 5½-inch pieces of paper and were told to “draw your ideas.”

This was the first time I’d been in a session where the ideas were approached in a visual way. My experiences up to that point had involved Post-It Notes, Sharpies and words—lots and lots of words.

At the end of the day, I asked one of the Gravity Tank partners about why they used the “draw your ideas” method. She told me that it came out of the fact that most of the staff had backgrounds in industrial design, so they were naturally inclined to draw. But, she said, they had also found that it really helped distill the idea down to its core. Without words, there was no room for fluff or distractions.

It was powerful. But why?

This summer, I embarked on an independent study to find some answers.


For the purposes of my study, “visual thinking” is not “visual learning,” which is about how information is taken in (Felder, 1993). Visual thinking is about how information is processed and expressed. "Visual thinking is a way to organize your thoughts and improve your ability to think and communicate. It’s a way to expand your range and capacity by going beyond the linear world of the written word, list and spreadsheet, and entering the non-linear world of complex spatial relationships, networks, maps and diagrams" (Gray, 2013).

A lot of our mental resources are dedicated to what we see—much more so than any other sense (Eagleman, 2011; Roam, 2011). We think in images first: even our conceptual mind is pre-linguistic (Margulies & Maal, 2002). The origins of our written language began more than 32,000 years ago with a simple drawing of a bull on a cave wall. Over time, those simple pictures evolved from representing a word to representing a sound, and the images themselves evolved into a symbolic alphabet (Roam, 2011).

At some point, the written word became the standard mode of communication. But using words alone to express ideas constrains our thinking (Gray, Brown & Macanufo, 2010; Roam, 2011). The written word is linear: lines on a page, progressing predictably from left to right. To express an idea visually—to create a picture— is to “make use of a massive range of cortical skills: colour, form, line, dimension, texture, visual rhythm, and especially imagination — a word taken from the Latin imaginari, literally meaning ‘to picture mentally’” (Buzan, 1993, p. 73).

Why Aren’t We All Visual Thinkers?


If visual thinking is “natural” to us, why is it so hard for so many of us to approach problem solving from a visual point of view?

If this is what you think, welcome to the club. That’s what I thought going into this study. Roam (2009) pointed out that the only group of people who willingly and enthusiastically say they can draw are kindergarteners.

There’s a widely held (mistaken) belief that either you know how to draw, or you don’t. Discomfort among adults regarding drawing is due to the fact that they haven’t got the “grammar” of it (Roam, 2011). The “grammar” is more simple than you might think. Rohde (2013) has broken down “drawing” into five basic elements:

When it comes to “drawing,” we are bogged down by intellectual and emotional baggage. It raises questions of good and bad, right and wrong, pretty and ugly. We get caught up in judgment and forget the point of visual thinking: to express ideas not more beautifully but more clearly and intuitively. "The point of problem-solving pictures isn’t to create great art. We’re not trying to show ourselves and others what things look like ‘out there’ (in the real world); we’re trying to show what things look like ‘in here’ (what we see in our own heads)" (Roam, 2009, p. 261).


When I started this independent study, one of the first things I read about was sketchnoting — in part because I know and have worked with the sketchnote evangelist Craighton Berman (www.craightonberman.com). “Sketchnotes are rich visual notes created from a mix of handwriting, drawings, hand-drawn typography, shapes and visual elements like arrows, boxes and lines” (Rohde, 2013, p. 2).

Sketchnoting requires you to think like a reporter, an information designer and an illustrator, all at the same time (Berman, 2011a). But “sketchnotes are about hearing and capturing meaningful ideas, not how well you draw” (Rohde, 2013, p. xiii).

I attempted my first sketchnote after I had spent some time learning the “grammar” of visual thinking. 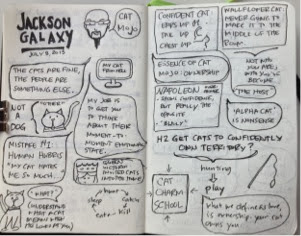 There’s definitely room for improvement — I need more icons, for example, and my structure isn’t clear — but I can say just from creating this and a few other sets of notes that the process of sketchnoting is a richer, more engaging note-taking process. It demands active listening while putting you very quickly into a convergent state: is this information important?


Mind Maps are “a system for generating and organizing any ideas” (Margulies & Maal, 2002, p. 10). The term “Mind Map” is a registered trademark of the Buzan Organization. Buzan (1993) described Mind Mapping as an external expression of a natural function of the human mind—what he calls “Radiant Thinking.” Because of the way thoughts are captured in a Mind Map—with just one word or symbol per line—the creator must distill ideas down to their core essence (Margulies & Maal, 2002).

While I’ve used Mind Maps as tools for divergent thinking in ideation sessions — as fuel for forced connections — I’ve never before deliberately created one to help clarify a problem. 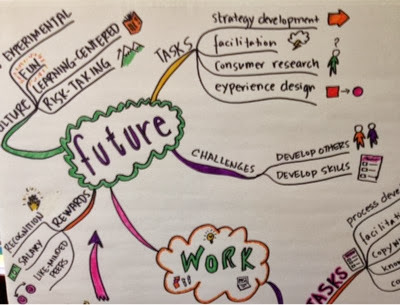 The development of this mind map (partially shown) was an interesting exercise in highlighting the essence. Because I wanted it to be more visual, I created icons to represent the key ideas, which was a great way to explore how to draw concepts.


Interested in learning more about visual thinking? I started with Dan Roam’s Napkin Academy training (www.napkinacademy.com). I also learned from:

Roam, D. (2009). The back of the napkin: Solving problems and selling ideas with pictures. New York, NY: Penguin.

Jody Fisher is the Ideation Strategist for the Emerging Growth Group at Nestlé Purina PetCare. In this role, she helps facilitate creative problem solving around strategic business challenges to feed the company’s innovation pipeline. Prior to joining Purina’s Emerging Growth Group, Jody was a copywriter for 15 years, working on brands like Friskies, Purina ONE, Gatorade, Pizza Hut and more. Jody earned a Bachelor of Arts in English from The Colorado College, and expects to finish her Master’s of Science in Creativity and Change Leadership at the ICSC in December, 2013.

You may also want to read "orbiting the Giant Hairball" by Gordon. MacKenzie. 1998. Great add to facilitators tool box.

That's one of my favorite books.