Creativity Is Hard Work: These 8 Steps Can Help! 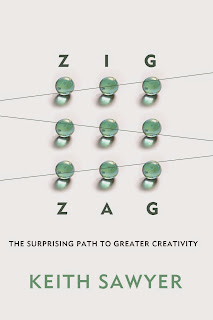 Keith Sawyer is a well-known name to anyone serious in the study of creativity. With an unconventional background that includes a stint as a video game designer and another as a jazz pianist, Sawyer is more than just a scholar; he is someone who has embraced creativity in his own life.

This makes the publication of Zig Zag, a book that promises to offer “a science-backed method to maximize creative potential in any sphere of life” (as stated in the blurb), not just the publishing of another self-help manual. Unlike Sawyer’s previous Explaining Creativity, which was catering to an academic audience, the purpose of this book is to reach out to anyone interested in creativity and offer to the novice reader a “creativity trainer” to improve his or her creativity skills.

To do so, Sawyer embarked on an extensive “highlight the essence” exercise. As he explains, the book not only distils his 20 plus years of experience as an educational psychologist and creativity researcher, but it is also the result of a yearlong reading exercise during which Sawyer tried to read a great quantity of popular creativity books (pretty much aiming at his same goal) and find what they had in common. In other words, Sawyer is after the essence of creativity.

Looking at the end notes shows the breath of the references behind the text. You can find recent books such as Burstein’s Spark: How creativity works (2011) or Linkner’s Disciplined dreaming (2011), staples such as Foster’s How to get ideas (2007), and the classics from the Sixties by Parnes, Osborn, Gordon just to name a few.  Notwithstanding this variety, Sawyer tries to stick to what is scientifically proven through research and practice.

The main outcome of this exercise is the identification of 8 steps that characterize the creative process. Sawyer’s 8 steps are Ask, Learn, Look, Play, Think, Fuse, Choose, and Make.  Everyone familiar with one or more existing creativity methods will not be surprised by a process approach broken down in steps. These particular steps can be easily mapped onto the phases offered by other methods such as Creative Problem Solving, Synectics, or Possibility Thinking. Making a parallel with CPS, ask, learn and look find a counterpart in assessing the situation and clarification steps; play and think are eminently examples of divergent thinking (ideation). Fuse and choose represent convergence (develop), while make is clearly implementation.

Why “zig zag” as the title? The reason is that similarly to other models, Sawyer does not suggest to necessarily go through the 8 steps in a linear fashion: the steps are highly iterative and the process can be initiated at any stage. This makes the path to creativity a non linear one, a zig zag.

The main idea behind the model is encapsulated in this statement: “Creativity did not descend like a bolt of lightning that lit up the world in a single, brilliant flash. It came in tiny steps, bits of insight, and incremental changes.”

Sawyer’s down to earth philosophy is also summarized by a quotation by artist Chuck Close that he repeats twice in the book (the second time at the end): “Inspiration is for amateurs, and the rest of us just show up and get to work.”

What does a chapter look like? Each chapter briefly presents the main idea with the aid of some vivid stories. Then a number of practices aimed at implementing the step are presented. Each practice is further broken down into specific recommendations. For example, the chapter on learn opens with a brief discussion of the concept of deliberate practice, then it presents three main practices to enhance our learning ability: practice deliberately, master your domain and learn forever. In the paragraph dedicated to master your domain we find specific recommendations such as get schooled, go for deeper understanding, apply what you know to new situations.

This structure is faithfully applied to every chapter discussing the eight steps, and makes the book highly structured. As Sawyer himself suggests, zig zag can also be a good approach to reading the book. A cover to cover reading could leave many unsatisfied since it is difficult to digest the incredible amount of information and ideas compressed in the 200 and so pages of the book.

So, is the book worth reading? The answer may change, depending whether we take into account a novice or an expert reader.

For someone new to the field of creativity the book is a gold mine. While sometimes it can get a bit dull (especially in the long enumeration of specific creativity techniques), overall it makes a great crash introduction to applied creativity offering practical recommendations and a realistic method to live a more creative life.

To be fair, the book is targeting lay people and not scholars. However the question remains whether the book may be useful also to more experienced practitioners or educators. For someone who is already familiar with the literature on creativity and might have read a few of the sources of the book, the path indicated in the book might not be so surprising. Most of the stories are not new; creativity scholars have heard the story of the birth of the Post-it notes in every imaginable form.

Personally, I have been delving into the literature on creativity over the past three years (admittedly not a long time) and I was already familiar probably with two thirds of the content of the book. However there was still one third of the content that was new to me and showed the effort of Sawyer to collect little gems from a diverse array of sources. I have even found inspiration from one of the chapters in developing a team building activity. One might argue that an expert reader might easily skim through the pages of the book and still find precious ideas thanks to Sawyer’s highlighting the essence exercise.

In conclusion, Zig Zag is a welcomed addition to the repertoire of creativity manuals aimed at the general public, with the merit of not trying to reinvent the wheel, but rather trying to capture the essence of more than fifty years of research and discussion in the field.


Mattia Miani, originally from Italy, is a manager executive education in an international University in Vietnam. In 2014 he received The Firstien Family Creativity Achievement Award from the International Center of Studies in Creativity for his training work in Asia.

**Looking for more books on creativity? Visit the ICSC Amazon Bookstore.
Posted by ICSC at 12:05 PM