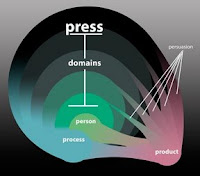 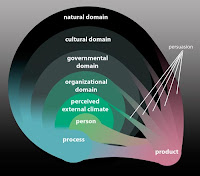 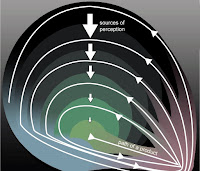 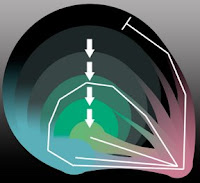 
A New Model
Every day we interact with different domains, their products, and their processes. The model of creativity that is presented here is an attempt to help identify a sustainable cycle of creativity. Before I go on any further, I would like to preface this brief article acknowledging that there is no set way to look at creativity. Resources and dynamic exchanges direct the efforts of a creative product; further complicating this are the cultures within which the product is made. This model attempts to provide a new eco-sociological perspective to what has been a relatively stable method of understanding creativity (see Figure 1).

In 1961, Mel Rhodes developed the 4 P’s of creativity. Here I advocate for a fifth P of persuasion to include in the model. As this model attempts to capture, persuasion plays a very integral part in a product (the physical manifestation of an idea) being adopted into a domain of the press. Depending on the level of the domain, Runco (2006) identified social factors that can support, undermine, or do neither for its acceptance into a given domain. If the product gains acceptance into either one of the domains, then it becomes a part of the press, where it becomes either internalized by the person in the form of a value or a perception (p. 162) of the press or as a tangible tool as a part of the process (see Figure 2).
Runco makes a strong statement towards the end of the chapter that recognizes that creativity exists within cultures and within those cultures are organizations. Expanding upon this statement, I would argue that the press should be separated by various domains to address what shapes a person’s perception and what influences the creative product. These domains are containers that hold all the relevant data, meant in the broadest sense to include all forms of viable capital including natural, social, personal, and man-made. The boundaries and scopes of these domains limit the creativity that is able to seen at the lower levels. For example, the environmental laws of the United States, which exist within a governmental domain, limit the amount of lead paint that can be used in children’s toys.


In 2007, The U.S. Consumer Product Safety Commission and Kids II, Inc. recalled 35,000 units of Baby Einstein Color Blocks due to excessive levels of lead paint. (Affairs, 2007) With manufacturers in China, any standard, none of which I am aware, of lead paint appears acceptable. Because the product was developed in another culture, which is not as aware of lead paint’s effects as the US, and the two governments do not regulate the amount of lead similarly, the product was not acceptable for sale.


This creativity model recognizes that effort needs to be undertaken by the two governments to handle the lead paint issue if the product is to enter the desired domain of its consumer. However, the use of lead paint is unacceptable in the natural domain since it contaminates waterways, and there is a general consensus in the cultural level that lead paint should not even be used in the product.


Arguably, this graphic model is over-simplified, and the previous example is limited. However, this model is not limited. There are at least 5 different worldviews about nature that would change this model appearance, such as the worldview developed by Rhodes that seemed to ignore it altogether or Isaksen, Dorval, and Treffinger (2000) breakdown of the press to include the natural environment as only a small consideration in the press.

A Systematic Flow: Fire
This representation to the left is an example of how a creative product such as fire might have been developed. 15,000 years ago, the Aborigines are thought to have landed in Australia. They brought with them their own value systems and fire. Because it was a useful item that was accepted because it was useful, testable, easily used, effective, adaptable, fire was extensively to settle the northern outback. The Aborigines have been recognized for using it for communication, cooking, clearing land, and controlling wildfires. With all of these benefits, there has come a price. Some researchers have pointed to the extensive use of fire by the Aborigines as being one of the major reasons for the extinction of a giant emu-like bird and either creating or speeding up the desertification of northern Australia. Due to the changes in climate and prey by their use of fire, their culture and other domains had to adapt to the very processes and product that they used (see Figure 3).

A Simple Flow: The Memo
Suzanne, an intern, writes a memo to her supervisor telling her about a trend that she notices from MTV and how they might be able to capitalize upon it. Upon receipt, her supervisor reads it and tosses the piece of paper into the trash. Suzanne comes from another culture than her boss who looked at her idea with disdain. The influences of the various domains started the trend from culture that Suzanne noticed and believed to be of value to her organization. Using the established processes such as using a piece of paper to write her idea, she sent the memo to her boss, who is within the higher organizational domain. The memo ends up trashed where it degrades in the natural environment. During the process of degradation, the paper becomes a part of another cycle some time at a future date (see Figure 4).


-- Aaron Gilbee, Graduate Student
Posted by ICSC at 7:52 AM

Aaron: There is a lot of literature out there, and it is easy to miss things. For your attention, then: Simonton proposed "persuasion" as the 5th P in 1988.

Building on the previous comment, I think you should be pleased that you had the same idea as someone so prolific as Dean Simonton!

Also, if you are looking for a sixth P, I think Runco might have offered Creative Potential in his most recent text book...

I should have responded a long time ago, but I was still in my infancy of thought. I am still growing.

My thinking was framed by the Brundtland Commission who established the initial definition of sustainability in 1988. I appreciate that you filled in the puzzle for me and made it a little more complete. Additionally, I would have to include influence with persuasion. The point is to recognize that within a given domain that there are those must's that restrict the adoption of a product because they cause resistance to their adoption. I use the term very very loosely. Adoption includes how something is presented by branding (persuasion and influence) and even the materials that could be adopted into the environment. For example, designing a product with compostable packaging so that they are adopted by nature. Thoughts?