The Hungry Mind: The Origins of Curiosity in Childhood 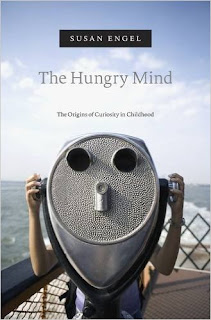 Have you ever wondered why some people grow up believing they are creative and others do not? This topic (creativity and childhood) occupies much of my thinking and is what drew me to study creativity. Interestingly, author Susan Engel’s recently published book The Hungry Mind explores that very same line of questioning, only her focus is on curiosity and the origins of curiosity in childhood. In fact, at the end of the first chapter she states: “This book is about why some children remain curious and others do not, and how we can encourage more curiosity in everyone.” When I read this I literally wrote in my book: “how I feel about creativity!! Woo hoo!” 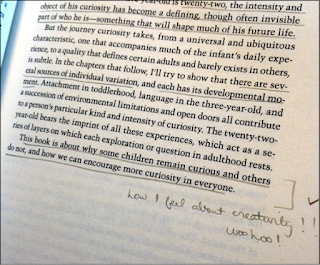 Based on over a decade of research and what Engel calls her obsession over children’s curiosity, this book provides an incredibly thorough and thought provoking study of curiosity’s origins in infancy, how it develops and changes and how we might encourage curiosity in school settings. Engel argues that curiosity begins as a robust characteristic, inherent in all normally developing babies, but that it becomes more fragile and hard to find at all by the time children are in elementary school.


“It is between the ages of three and eleven that children seem to either develop an appetite for knowledge and the habit of inquiry, or they don’t.”

By tracing the development of curiosity, the author constructs an empirically compelling story of how it develops, particularly during the first twelve years of life and how parents, schools, and other children shape a child’s curiosity. This book aims to engage the reader, appealing to parents, educators, psychologists and anyone interested in the topic by encouraging them:

1) To think about their own curiosity,

2) To understand how curiosity develops, and

3) To gain conviction that curiosity can and should be central to classroom learning.

Engel draws on over a century of research and developmental theories dating back from the early 1900s right up until today citing the work of Darwin, Piaget, Duckworth, Dewey, Vygotsky, and Gopnik, to name a few. Of particular interest to me are the nuances of parenting that have a profound impact on the psychological development of babies and children. For instance, the signals children receive from parents (often unknowingly) that indicate they can or can’t or should or shouldn’t explore objects; the importance of modeling; and the fact that children watch and learn from adult behavior. When parents give their children some freedom to wander, explore, and tinker it makes a difference versus when parents express fear or disapproval of inquiry. These are some examples of how curiosity might be nourished or squelched at home. Just as children are largely impacted by home life, the same is true at school – which is a big part of the conversation of this book.

The story of Charles Darwin’s large appetite for investigations and his parents’ encouragement to explore, investigate and pursue his interests provides the perfect segue into examining what happens when a happily curious young child goes to school. Engel asks: “Do children bring their curiosity, and its tools, to school with them?” Recognizing that this is a difficult area of study to accurately measure, Engel devised a study with kindergarten and fifth grade students to measure three types of behavior as episodes of curiosity: questions, intent and direct gazing, and manipulating objects. While the data did not support the conclusion that children are less curious by the time they are in kindergarten and even less so by the end of grade school, it uncovered the discovery that little curiosity exists in grade school. This conclusion was confirmed by the work of Tizard and Hughes whom fitted preschoolers with tape recorders to learn how many questions they asked at home with their parents versus when at preschool. On average, preschoolers they studied asked twenty-six questions per hour at home, and only two per hour when the children were in school. Why is this?

Engel provides an impressive scientific dissection of the various aspects that affect curiosity. For example, she identifies the gap in the research examining how teachers’ own habits and dispositions influence the children they teach. A kindergarten teacher’s response to a child’s question can either encourage or discourage further curiosity. For instance, the teacher that discourages questions from students in order to keep the class on task discourages inquiry, whereas the teacher that acknowledges the student’s exploration and responds with a question to consider before moving on encourages inquiry. The difference between the responses of the two teachers will help shape the inquiry that will or will not unfold within each respective classroom. In addition to raising awareness to unconscious habits, teachers are also encouraged to deliberately design educational activities to encourage curiosity and to use children’s curiosity to guide what and how to teach.


“Rather than disciplining children to learn, why not create the conditions in which children actually are hungry for knowledge?”

About three quarters of the way through the book, the content shifts to ways in which curiosity can be satiated (cleverly and appropriately, the hunger analogy is maintained throughout the book) including through the use of time and solitude, through storytelling, reading, and autonomy or freedom. These conditions can be extremely valuable to the development of inquiry and intrinsic motivation to support life-long learning. After all, studies show that curiosity is a potent ingredient in learning and that children learn better when their curiosity is piqued.

This is a fascinating and very important book in the fields of psychology, education, creativity and human development. I enjoyed the blend of personal story telling, mixed with empirical research, mixed with scholarly theorists citing influences that contribute to what we know today about curiosity. To say that the breadth and depth of this book is robust is an understatement. Engel truly treats her reader as a hungry mind as she feeds study after study, data, stories, evidence, conclusions and suggestions. I believe that with more knowledge and awareness of the important role that parents and teachers play in allowing curiosity to flourish in children we can take steps to provide the conditions in which curiosity, like creativity, can be cultivated.

ABOUT LINA PUGSLEY:
Lina Pugsley is a graduate student at the International Center for Studies in Creativity at SUNY Buffalo State. She is an artist, mother, designer and former award-winning Art Director in the Digital Advertising world. Since becoming a mother, her passion shifted from producing innovative ideas for Fortune 500 companies to designing compelling creative opportunities to engage her two daughters.

In the last 8 years, Lina has been researching and exploring ways to nurture creative skills and attitudes in children to promote creative confidence and resilience. She is the founder of Keeping Creativity Alive, an online resource for parents and teachers on ways to cultivate creativity in children starting in the early years.

Good sharing, as a good education is important in securing a good future, many students feel the pressure to excel in their examinations. With the stress and anxiety, especially dealing with exam anxiety, students tend to “break” under the pressure. Some are found to even attempt suicide. At International Psychology Centre (IPC), parents can bring their children in for professional consultation if they find that their child has problems coping at school. For detail visit:
http://kidbuxblog.com/dealing-with-exam-anxiety/