Big Question: What is the role of creativity in talent development? 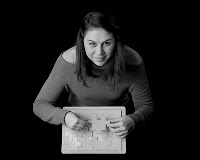 Alison Sellers has always enjoyed solving puzzles and problems. When she graduates from college with a degree in political science and gender studies, she plans to continue on to graduate school and hopes to help tackle issues involving violence against women. (Photo ©2010 Lee Anne White)

What is the role of creativity in talent development?

Giftedness isn’t what it used to be. For the better part of the 20th century, giftedness was equated with high general intelligence by the fields of education and psychology (Moltzen, 2009). But in 1995, Feldhusen reported that a “major theoretical change” (p. 92) was taking place in the field of gifted education: “We are finally beginning to recognize that giftedness is not a unitary trait, not just intellectual ability, and not diagnosable at one point in time with a particular set of tests and rating scales” (p. 92).

Theoretical changes, however, take time. These changes have their roots in the structure of the intellect model (Guilford, 1967), Taylor’s multiple talents (Taylor, 1969), the theory of multiple intelligences (Gardner, 1983), and the triarchic theory of successful intelligence (Sternberg, 1985)—each of which challenged the concept of intelligence as a single construct measured by IQ. Changes have also been spurred by Torrance (1962), Renzulli (1978), Sternberg and Lubart (1993), and others who have delivered compelling research on the role of creativity in giftedness.

Davidson (2009) calls giftedness an “odd construct” (p. 81), noting that “even though exceptional abilities have been acknowledged for centuries (Ziegler & Heller, 2000), there is still no consensus on what it means for someone to be gifted” (p. 81). Without a doubt, the terminology has become more confusing as the concept has shifted from a single type of intelligence to multiple intelligences and from a notion of giftedness as a fixed trait with which one is born to that of talents which are developed over a life span through hard work and determination (Arnold, Noble, & Subotnik, 1996; Bloom, 1985; Feldhusen, 1995; Keating, 2009; Matthews, 2009; Piirto, 1998; Reis, 1996; Subotnik, 2009; Sternberg, 2005).

It is common for professionals in this field to lump the terms gifted and talented together, using them synonymously (Moltzen, 2009). However, some argue that gifted and talented have distinct meanings. Gagné (2004), for instance, believed that “giftedness designates the possession and use of untrained and spontaneously expressed superior natural abilities” and that “talent designates the superior mastery of systematically developed abilities (or skills) and knowledge” (para. 2-3). Others, such as Reis (1998), use gifted for “those with high abilities or potentials in several areas or in general,” and talented for “individuals with distinct abilities in one or two areas, such as science, math, and art” (p. 4). And there are holdouts, such as the National Association for Gifted Children, which continues to use the term gifted, defining gifted individuals as “those who demonstrate outstanding levels of aptitude or competence in one or more domains” (NAGC, n.d.).

Perhaps Renzulli (1978) said it best when he explained that one way of viewing such definitions is along a continuum from conservative to liberal. The good news is that while far too many educational programs still emphasize academic giftedness, the bar is clearly moving in a more liberal direction—one that is much more inclusive rather than exclusive. Also, no matter what they call it, the leading experts in this field have embraced a developmental perspective on giftedness and talent, and most have begun to integrate talent development into their vocabulary.

A Top Down Look at Talent Development
If the construct of giftedness is shifting toward a developmental model in which talents are developed over a lifetime, then much can be learned by looking at the lives of talented adults. Such individuals are most frequently identified by such factors as eminence and high levels of achievement or productivity. Davidson (2009) noted that “adult giftedness is typically based on extraordinary discovery of a new way to conceptualize information in a specific domain” (p. 81). Such domain-altering contributions, by definition, imply creativity—the development of original products, systems, or ideas that are valued by others (Ochse, 1990; Sternberg, 2005).

Researchers have, of course, been fascinated by high achieving and eminent individuals for centuries. Yet more recent studies (Arnold, Noble, & Subotnik, 1996; Keller-Mathers, 2004; Reis, 1996; Reis & Sullivan, 2009; Renzulli, 1986; Sternberg, 1986; Tannenbaum, 1991; Wallace and Gruber, 1989) have given us a better understanding of adult giftedness and the factors that contributed to these individuals’ successes. What they’ve found is that intelligence is not the only driver in an individual’s realization of talent. Indeed, there are numerous contributing factors, and both creativity and intrinsic motivation have been identified by most as being at least equally important as, if not more important than, intelligence or ability (Kaufman, Kaufman, Beghetto, Burgess, & Persson, 2009, Renzulli, 1986).

As a result of these findings, numerous models for talent development have evolved in the hopes of better identifying individuals with high potential and finding ways to help nurture their talents. Significantly, almost all of these models include creativity, which tends to be viewed in one of four ways: 1) as an important personality trait of highly talented individuals (Piirto, 1998; Reis & Sullivan, 2009), 2) as a key factor in the development of talent (Renzulli, 1978, 1986; Sternberg, 2003), 3) as a type of talent or intelligence, such as creative giftedness (Gagné, 1995; Renzulli & Reis, 2009; Runco, 2005; Sternberg, 1985; Sternberg & Lubart, 1993;), or 4) as the principle objective of talent development (Gowan, 1980).
Many researchers embrace creativity in each of these ways. Renzulli and Reis (2009) are good examples. Their work with the Schoolwide Enrichment Model and Renzulli Learning is based on Renzulli’s three-ring conception of giftedness, which includes the interaction of three factors: above-average ability, task commitment, and creativity. Yet they also write about creatively gifted individuals and the personality traits that distinguish them from those who are academically gifted. And they evaluate giftedness based on creative productivity—projects, ideas, and products that address real-life challenges. It is important to note that they talk about a fourth aspect as well, which is also common in other models, and that is the impact of the environment on individuals and their ability to be creative. Environmental factors include such aspects as home, school, community, and culture. The way they view creativity in talent development closely aligns with Rhodes’ (1961) four Ps of creativity: the creative person, process, product, and press. This way of looking at talent development allows many educational strategies currently being developed for students with advanced learning abilities or specialized talents to be adapted for all students.

Wisdom, Leadership, and Social Capital
Why does any of this matter? “What could matter more than understanding how people can fulfill their extraordinary potential?” (Dweck, 2009, p. xiv). As parents, teachers, and friends, we want to see children grow up to be healthy, happy, and succeeding at what they enjoy and do best. As employers, community leaders, and as a society, we are searching for tomorrow’s leaders—those with vision, insight, and passion who will tackle challenges and create positive change in their fields—whether in the arts, sciences, public service, or other area.

The concepts of leadership and social capital currently interest researchers in the fields of both talent development and creativity. Renzulli (2002) highlighted the decline in social capital in the latter half of the 20th Century as evidenced by a decrease in involvement in community and church organizations, politics and voting, parent/teacher associations, and fraternal groups. He also pointed out that such declines “have been paralleled by an increasing tendency for young people to focus on narrow professional success and individual economic gain” (p. 34). He posed the following:

"Research on the characteristics of gifted individuals has addressed the question: What causes some people to use their intellectual, motivational, and creative assets in ways that lead to outstanding creative productivity, while others with similar assets fail to achieve high levels of accomplishment? Perhaps an even more important question, as far as social capital is concerned, is: What causes some people to mobilize their interpersonal, political, ethical, and moral lives in such ways that they place human concerns and the common good above materialism, ego enhancement, and self-indulgence?” (p. 35)

Sternberg (2005) explored this question from another angle. He argued that the most important kind of giftedness is that of leadership, noting that “gifted adults—certainly those who are remembered—are those who take a leadership role” (p. 37). He proposed that a synthesis of wisdom, intelligence, and creativity results in effective leadership.

Puccio, Murdock, and Mance (2007) cited the important relationship between change, leadership, and creativity—comparing them to the intertwining strands or a rope. It is their belief that creativity is a core construct that distinguishes leadership from management.

Self Actualization and Gender Differences
Eminence, recognition, leadership, and high levels of productivity, however, are not the only measures of achievement. Kerr (1994) defined achievement in self-actualization terms, calling it “the use of one’s gifts and talents, as one understands them, to the fullest. Achievement means being all that one can be, according to one’s deeply held values” (p. xi).

Over the years, many have made strong connections between self-actualization and creativity (Maslow, 1971; Rogers, 1962; Runco , Ebersole, & Mraz, 1997). Davis (2004) called the relationship between the two “one of the most profoundly important concepts in the field of creativity” (p2). Maslow (1971) said, “My feeling is that the concept of creativeness and the concept of the healthy, self-actualizing, fully human person seem to be coming closer and closer together, and may turn out to be the same thing” (p. 57). Runco, Ebersole, & Mraz (1997) acknowledged the need for additional empirical evidence on this subject, but observed, “There are clear parallels between the traits that characterize creative people and the traits found in self-actualized individuals” (p. 266).

Some also suggest that there are gender differences in terms of how achievement is defined. Kerr (1994); Reis (1996, 1998); Arnold, Noble, and Subotnik (1996); and Keller-Mathers (2004) have found that women value achievement in the personal realm just as much as they do achievement in the public realm. It is not unusual for family, home, and relationships to be viewed as more important than and just as creatively challenging as more public accomplishments, even among women who have achieved according to more traditional standards.

Conclusion
Indeed, giftedness is not what it used to be. Research has shown that it is not merely intelligence, but the combination of above-average levels of appropriate intelligences or abilities, a creative mindset, and intrinsic motivation that lead individuals to extraordinary achievement and self actualization. Whether one views talent development as becoming all that one can be from a public perspective of extraordinary achievements and leadership or from the more personal perspective of self-actualization, creativity is an essential ingredient. Piirto (1998) believed creativity is “the underpinning, the basement, the foundation, that permits talent to be realized” (p. 42).

Others agree. Kim (2009) observed that “Striking advances in human affairs such as the creative arts and political and military leadership, as well as in scientific discovery and invention are mainly due to a few exceptionally creative gifted individuals (Weyl, 1970; Taylor, 1972; Toynbee, 1964)” (p. 571). Taylor (1984), in reference to a speech given by historian Arnold Toynbee, described creativity as the “history-making ingredient” and “mankind’s ultimate capital asset” (p. 106).

Although he isn’t part of the current discussion on talent development, perhaps Pearce (1917) said it best when writing the guiding philosophy for a small, liberal arts college in Georgia. As president of the college, he encouraged students “to be modestly conscious of the limitations of human knowledge and serenely confident of the limitless reaches of human endeavor.”

Talent development is an evolving theoretical construct of which creativity is a key component that should be nurtured in ourselves and in others. Knowledge and intelligence help us understand and evaluate what is. Creativity allows us to imagine what might be and how to get there. Passion, drive, and motivation are what make it happen.

I learn new information from your blog, you are doing a great job. Keep it up.
https://blog.mindvalley.com/triarchic-theory-of-intelligence/